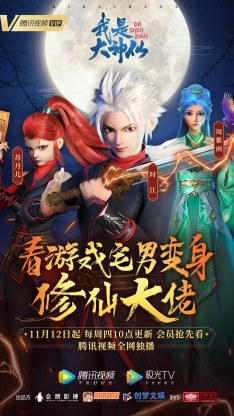 Plot Summary: This story is about ShiJiang, a 7-year-old man with a 21-year-old body, when he’s going to see a doctor to take his medication, this one says there’s nothing…. He said his body grew 3x faster than usual and when he turned 30 his body would become like 90, and would die young after learning of his illness, ShiJiang tried to live a normal school life before He died, as would he return to elementary school with his beloved friend. After the incident ShiJiang returned to the eternal world to avoid abnormal growth, from then on that with the intelligence and wisdom he gained from the earth, he walked the path of immortality to become a legendary god to restore his life to normal

Other name: Wo Shi Da Shenxian ; I Am A Great God; 我是大神仙