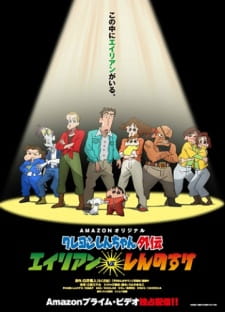 Plot Summary: Unlike the main television anime series which is mostly set in modern-day Japan, the new series will be a "sealed room" suspense comedy set 100 years in the future. The story begins when Shinnosuke and the entire Nohara family wake up from cold sleep to find themselves aboard a space ship drifting in space. The anime will depict the various events that take place inside the ship.